Entranced - Broken for your Goddess

Rated 5.00 out of 5 based on 1 customer rating
(1 customer review)
Update Required To play the media you will need to either update your browser to a recent version or update your Flash plugin.

Video Candle Fractionation – You have a hypno-fetish or difficulties experiencing trance? This long, sensual and effective fractionation by Lady Surrender will drop you deep into incredibly arousing and mindless trance. 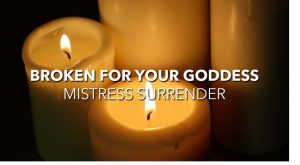 Gaze deep into the flame, My sweet love… and slip into My world as you become mindless before your Goddess. Kneel and submit.

Dropping into the most aroused state of trance with every number I count down.

your mind breaking free. Utterly mindless. Broken for your Goddess.

Highly effective trance for subjects with a hypno-fetish or who have difficulty experiencing trance.

Entrancement Series – Elegant sophisticated trance for subjects who have a delicious hypno-fetish.
View the complete Entranced-Series

Let us know what you think...

Leave a Review Ask a Question

What others are saying

Continue as a Guest

Continue as a Guest

What are you into?

You will receive the file within 24 hours of your subscription via email. Your information will not be given to third parties or used for spam! We will only use it in oder to inform you about new releases and exclusive offers!